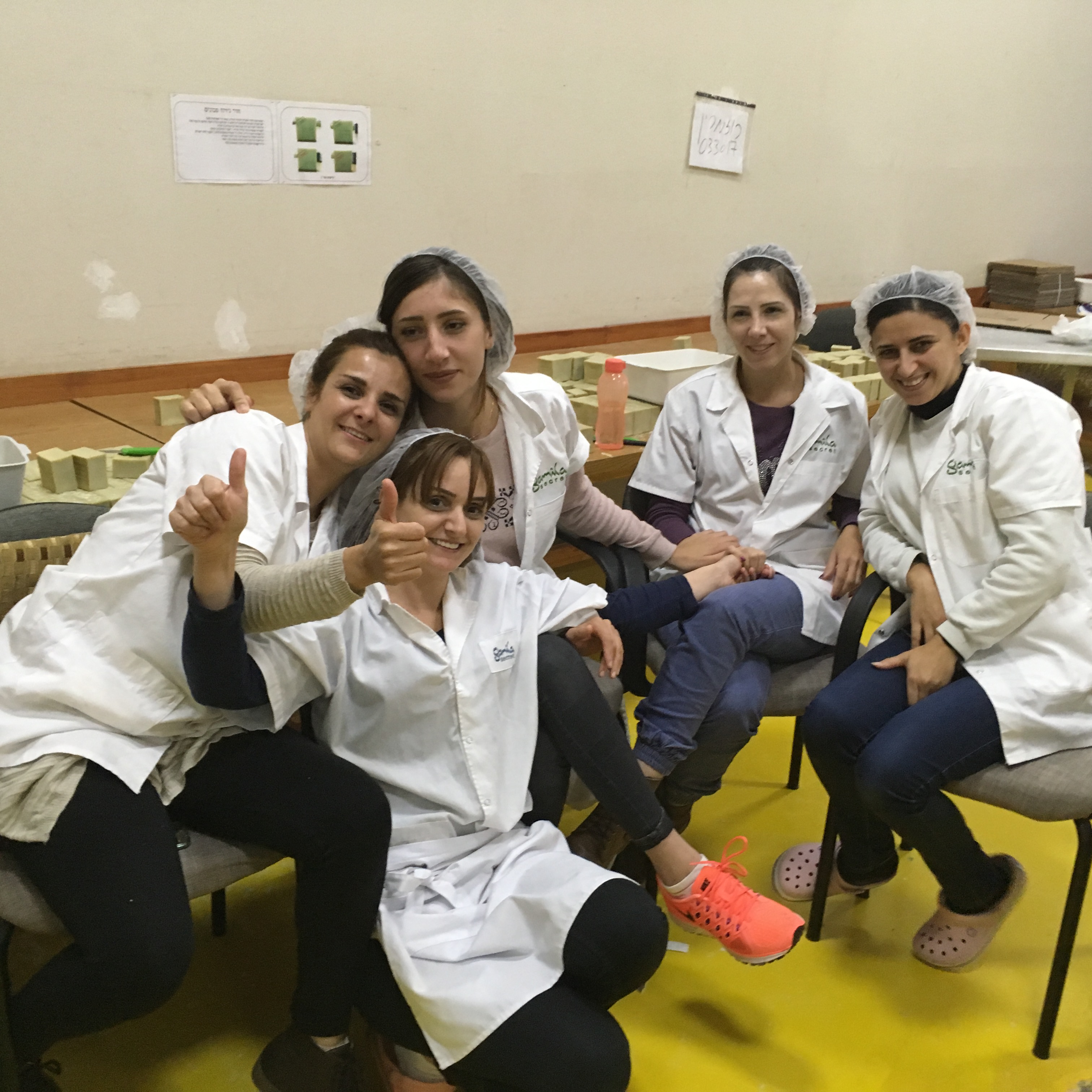 Gamila Secret is a successful case of women’s empowerment connected with some of the Sustainable Development Goals: Gender Equality, Decent Work, Responsible Consumption and Production.

It is another working day for the employees of Gamila Secret in the factory based in the Galilee region, Northern Israel. The plant is foremost committed to supporting local women, and as such employs only women in its production facilities. Through such actions, Gamila stands as a symbol of forward thinking in the region, enabling the financial emancipation of women through skills building and knowledge sharing. This group of women together with ten others is responsible for fabrication of handmade soaps, perfecting the shapes and final outcome before packaging and sales.

A perfume of flowers and herbs fills the air of the whole factory. These biological (organic) soaps are prepared with more than 80% of pure olive oil with a combination of other active and healing natural ingredients, such as: rose and rose-essence, pomegranate, lavender and mint (sourced locally). And before reaching the skilled hands of the women in the factory, the soaps ‘rest’ for six months in order to dry completely and ensure a superior product.

The soap fabrication is 100% manual, creating a truly artisanal product, and the quality control is very demanding. Gamila Hiar, the founder of Gamila Secret, follows this process in person, overseeing the factor. However, for these women, her employees, she is not a supervisor, but she plays an inspirational role in their daily lives and it is often viewed as a privilege to work closely to ‘Savta Gamila’, something like Grandma Gamila as everybody calls her in Arabic. She is a well known figure in the community.

In fact, these women feel very empowered in her presence, because Gamila is leading by example. She challenged her Druze cultural and religious traditions when she decided to work as well as being a housewife when she was still a teenager. By that time, having already one child, she pursued her financial independence, knowledge about the power of plants to health and a total autonomy in her life decisions. This is something not encouraged, nor accepted in that time, and it is still an issue even in the 21st century in small communities like Pek’in where Gamila has been living since was born.

In a conversation during a break in their activities, these ladies stated that working with ‘Savta Gamila’, allowed them to become true professionals by improving their competences and giving them new goals and responsibilities in life. The impact that this brought to them is the fact that being a good professional made them also them also better mothers, wives and households, they said. “I got married very young and by that time I thought to myself that I could be only a full time housewife, but when I met Gamila and started to work with her that changed my personality and the women I am today”, said Enas (first picture)

The ladies reinforce that their self-esteem increased and that changed how they are viewed in society—the societal recognition of women’s roles has improved because they all support their families with their salaries, which is at least three times more than the average paid in that region, even if still below men’s salaries.

Working in different functions in the factory for more than 12 years, Heiam (second picture) aims to stay here as long as possible. “I want to develop my career and reach better positions here. This is the place I want to be”.

Heiam’s feeling is not an exception in her group. Her colleagues say that the factory is much more than a working environment, it is a family. “We don’t feel like as we have a boss, or manager watching us, we feel like being with our own family and relaxed cause there is no distance or differences between us here” said Manar (third picture).

The company and its impact investor, Green Innovations, are working hard to improve this “family” and keep these women’s satisfaction levels even higher. They perform regular monitoring and surveys to get a sense of the morale in the company and working conditions. With Green’s support, Gamila aims to continue to enhance women’s empowerment throughout the organization. In practice, the company will soon involve women in more specialized activities in the laboratory, supporting through Green’s funding. “They will learn Biology and Chemistry through research and development process” Said Fuad Hiar, Gamila’s son and the company partner.

Outside the factory, Gamila Secret encourages its distributors to hire women for marketing and sales activities in the 14 countries where it operates. During more than a decade, training programs have been offered to the staff in order to support the company’s success and growth in sales.

At the community level, Gamila Secret engages with teachers, opinion makers and role models to bring knowledge to young women in Pek’ in Village and the North of Israel. Gamila Riar plays a leadership role in some of the lectures that discusses issues on entrepreneurship and gender rights given in community centers and in universities.

This all makes Gamila Secret a successful case of women’s empowerment connected with some of the Sustainable Development Goals: Gender Equality, Decent Work, Responsible Consumption and Production. When asked, the company reveals the secrets of reaching social and economic impact through the voices of these ladies when asked about the most important lesson for life that ‘Savta Gamila’ has taught them. “Be brave, work hard and to don’t be afraid!”.