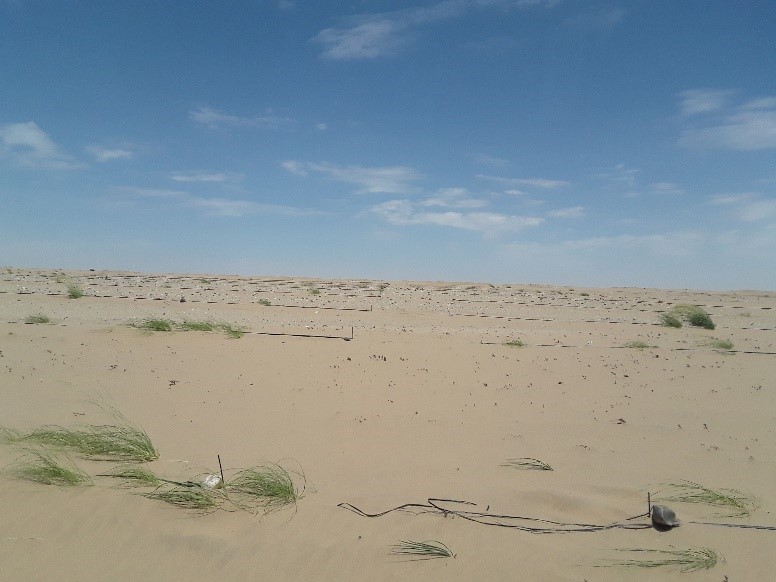 Combat desertification and restore degraded land and soil affected by desertification is one of the SGD 15 “Life on Land” targets, tackled by Green Innovations’ investee Agricultiva’s Anti-desertification Project. Agricultiva has planted a green windbreak around the city of Tombwa, in Namibe Desert, to stop the advance of desert sands and protect people’s properties and resources, collective infrastructures and the local economy, while creating a safe area for urban growth.

Once known for its’ fisheries and factories, the city of Tombwa, in the Southwest of Angola, is where the North-South costal road comes to end. All around it, an inspiring landscape of sand and dunes, spotted with Welwitchia mirabilis plants, reminds us we are at Namibe – the oldest desert in the world.

The city, formerly called Porto Alexandre, grew by the sea and prospered from its’ resources. It has resisted troubled times, with the war and economic crisis, focusing now some hopes in the recovery of fishing, industry and tourism. All this time, the desert, featuring its’ beautiful landscape, has always challenged the city’s resilience to the force of nature, trying to advance over the manmade constructions. The concerns about environmental protection are not new here, as residents and authorities soon learned how to respect and deal with the desert. Indeed, the first green windbreak planted around Tombwa goes back to 1926-1928, seventy-two years after the city’s foundation.

Since then, the planting of trees has been an unfinished task. There were times, during the war, when people had to cut trees for wood, as a means of survival. Even after that, poverty, ignorance and vandalism have threatened the city’s green protection against desert sands… and the desert continued to move over Tombwa.

Very often, the Administration has to remove the sand that insists to cover the main access road to the city, putting the traffic in danger and the city at risk of isolation. Another road to an old factory has already disappeared under the sand. Two cemeteries are inoperative and the one in use nowadays is already suffering the impact of sands. In the south part of the city, the dunes advanced over two houses and blocked the backdoors, swallowing some back rooms.

The awareness of the need to do something about desertification was at the core of several initiatives and campaigns, promoted in the last decades by the Forestry Development Institute, the Provincial Government, the Municipal Administration, churches and civil society organisations. On their own, all together or in partnership, they have mobilized the local population, from all ages and backgrounds, to plant and take care of successive “generations” of casuarina and acacia trees we can still see around the urban area. One of the planting campaigns of the Forestry Development Institute has also distributed seeds and saplings of ornamental trees to residents of the city’s urban centre, colouring their backyards and gardens with bougainvillaea and other garden flowers.

From state authorities’ officials to church leaders, from school board members to businesspeople, from the children to the elderly, everyone we talked to recognizes the importance of trees to the survival of the city. In the Mayor’s words: “we need them as we need the air to breathe”.

However, the city growth demands extensive actions that can’t be carried only with shovels and hoes. The Municipal Administration is constantly warning the population not to build in risk areas, but the demographic pressure requires other adequate responses. The city has to expand somewhere, in a safe and sustainable way. The solution: to plant another green windbreak, on the west side of the city, to cover more 80 hectares for new safe constructions.

The challenge was accepted by Green Innovations’ investee Agricultiva. 30,000 saplings of Tamarix angolensis were planted along 8 km of a drip irrigations system, in 13 rows, 100 meters wide. This was the first time this species was used in Angola in a project like this, although Tamarix has shown successful results in reforestation projects in other parts of the world and Tamarix angolensis is endemic in this region. Tamarix is adapted to desert ecosystem and is more resistant to fire than other species.

Thirty one workers were engaged in this task, most of them from the Forestry Development Institute. This governmental body is the main partner of Agricultiva in the project, which has a significant capacity building component, not only through on job training, but also by the installation and equipment of a logistics centre with a water well, a pumping system and greenhouses to grow Tamarix saplings.

After the project delivery, the Forestry Development Institute will operate the irrigation system and take care of the green windbreak. It will demand more effort in the first years, as the desert area where the saplings were planted is actually on a fresh water aquifer just 50 cm below the surface. Therefore, when the saplings, planted with 10 cm, grow roots reaching the aquifer, they’ll no longer need to be irrigated.

The planting process welcomed another important contribution in the beginning of 2018, when a group of 98 volunteers, mostly young members, from several provinces of the country, brought their good will and helping hands to plant 20,000 of the 30,000 saplings of the windbreak.

According to the group leader, Ferdinando Dias, when putting the plant in the soil, they asked Mother Earth to kindly receive the new living being and take care of it.

The next months will be crucial for the Tamarix saplings to stick to earth and grow. Their survival will rely on the non-stop work of the irrigation system, the care and surveillance of the Forestry Development Institute staff and the awareness and collaboration of the local population. This community engagement won’t only prevent and reproach robbery and vandalism practices, but also admit those little sticks will be trees in the near future, if they are left on the ground. Today those trees need to be taken care of, and will protect the city - the economy, the people, their belongings, their heritage, their assets and their future - from the threatening force of the desert sands.